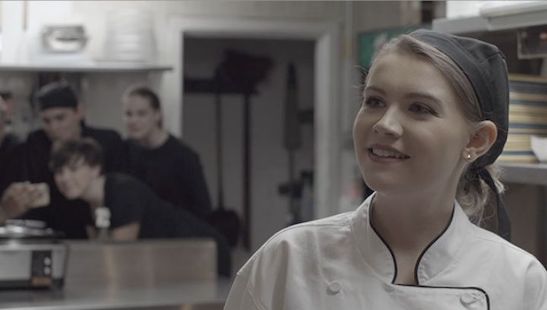 Student films, interactive games, and immersive experiences will transcend audience expectations once again at the Traverse City Film Festival (TCFF). This year’s lineup includes a feature film and short films by students from the College of Arts & Letters and College of Communication Arts and Sciences. A gaming gallery, called The Woz, also will be on display, designed exclusively by the MSU Game Design and Development program.

MSU’s presence as the 2018 TCFF Learning and Innovation Sponsor is part of a shared commitment to the media arts and immersive storytelling.

Nearly a dozen films created by students at Michigan State University will debut on the big screen at TCFF 2018. From light-hearted comedies to science fiction noirs, a variety of film genres will be represented.

TCFF also will be the world premiere of one of the only student-made feature films in the nation. MSU’s exclusive Theatre2Film program will screen Crandie’s, a comedy about a highly ranked former New York chef who makes a new start at a Midwest diner. Students from the College of Arts & Letters and ComArtSci joined forces to write, direct, film, and produce Crandie’s. The premiere is scheduled for Wednesday, August 1, at noon at Old Town Playhouse, 148 E. Eighth Street, Traverse City.

Other MSU student productions include the TV pilot I’m with the Band and a host of short films, including:

A full list of student film screenings is available on the MSU@TCFF web page.

MSU professor and filmmaker Joel Potrykus, Director of the TCFF feature Relaxer, will lead a session for the TCFF Film School called “10 Mistakes of the Student Film (and Sometimes Mine).” The session will illuminate 10 subtle tells that distinguish a professional film from a student film. Attendees can expect an authentic look at the universal experience of failure in filmmaking.

Three of Potrykus’s feature films have been screened at the Lincoln Center for the Arts, MoMA, Egyptian Theatre in Los Angeles, and the Cinémathèque Française in Paris. His writing has been invited to be part of the Academy of Motion Picture Arts and Science permanent collection.

Potrykus’s 90-minute session will be held Saturday, August 4, at 3 p.m. in Scholars Hall on the campus of Northwestern Michigan College.

Game Design and Development Program Wow at The Woz

As the TCFF Learning and Innovation Partner, MSU is bringing its fourth year of immersive media experiences to festival-goers through The Woz gaming gallery. Join us to participate in this interactive arcade of virtual reality (VR) and video and mobile games on the most recent technology.

The games and VR experiences to be featured at The Woz were designed by MSU student and faculty developers through its top-ranked Game Design and Development program and the Games for Entertainment and Learning Lab.

Last year’s hit game, Plunder Panic, will be back at The Woz. Plunder Panic is a multiplayer arcade game for those searching for a spirited high-seas adventure. Its public launch at TCFF last year led to multiple awards and a boat-load of entertainment. The student-made game won the 2017 IndieCade Audience Choice Award and is riding its wave of success to the Nintendo Switch in 2019.

In addition to Plunder Panic, this year’s gallery will see new games, news developers, and endless ways to play.

The Woz gallery is scheduled for August 1-4 at Central High School in Traverse City. Players of all ages are welcome and admission is free.