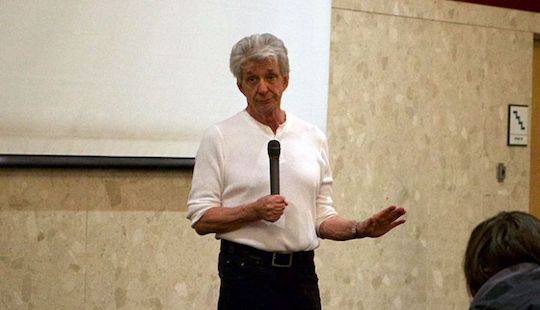 MSU students interested in film, film production, and the effects of film on culture had the unique opportunity of meeting and discussing these topics with Hollywood actor and film producer John Morrissey.

Morrissey visited Michigan State University this week to meet with classes, deliver a lecture, and screen his 1998 feature film, American History X, which follows a former Neo-Nazi who is trying to keep his brother from following the same path of racism and white supremacy.

“I have made other films because I needed the money, but what I really have always wanted to do is make films like this one, films that really matter,” Morrissey explained. “American History X is a plea for racial tolerance. It certainly touches on subjects that, in my opinion, are more relevant today than they were 20 years ago. I intend on going to Warner Brothers to try to convince them to re-release the film, because it is so important.”

I have made other films because I needed the money, but what I really have always wanted to do is make films like this one, films that really matter.

After the film screening on April 2, students and others who attended had the opportunity to ask Morrissey questions about the film during a Q&A session, which was moderated by John Valadez, Professor of Practice with a dual appointment in the Department of Media and Information and the Film Studies Program in the Department of English.

The following day, about 260 students attended a lecture presented by Morrissey. Among the students in attendance were those from the following three courses: Intro to Digital Film & Media (FLM 260), Producing for Cinema and TV (MI 351), and Understanding Media (MI 101)

Morrissey began the lecture with a short introduction of his work, and then held an open conversation with the students, which was moderated by Dave Ewoldsen, Professor in the Department of Media and Information.

Students asked for Morrissey’s insider point-of-view on a number of topics including racism and sexism in the film industry, the relationship between culture and media, the importance of the #MeToo movement, and why representation in film matters. As a member of the Academy of Motion Picture Arts and Sciences, Morrissey also offered insider information on the Academy Awards.

Morrissey did not leave the MSU Union Ballroom until every last question was answered.

Morrissey’s visit was sponsored by:

Conversations with CAL Offers a Preview to Arts Launch