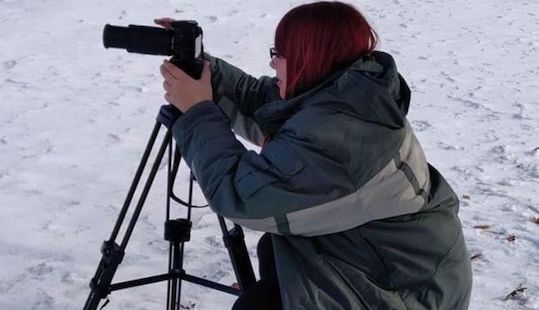 Since graduating from Michigan State University last May, Amy Wagenaar has gone from being an MSU student to the Editorial, Social, and Video Coordinator for the Historical Society of Michigan (HSM) based in Lansing. Wagenaar earned a dual degree in Film Studies and Media and Information and a minor in Fiction Filmmaking. We recently caught up with her, finding out more about her position and how her film major has helped with her career.

Describe your position and responsibilities:

I exist in the cross section of three different fields: magazine publishing, social media management and marketing, and multimedia videography and graphics. I work under HSM’s Director of Communications, Nancy Feldbush, and a team of employees to help manufacture Michigan History magazine and the membership publication, Chronicle, as well as work intensively to grow and maintain HSM’s social media presence.

The most innovative aspect of my job is my work with video. Prior to my arrival, HSM did not have a video presence. I was brought on full-time to begin the process of producing promotional videos for the society in order to help HSM grow as an organization in this multimedia-dependent age.

Given the many fields my job touches, my day-to-day is often a constant source of change. One day, I will be working with the editorial team to acquire, edit, design, and produce Michigan History. The next day, I might be composing online marketing campaigns on HSM’s Facebook pages and communicating with local historical organizations throughout the state. After that, I might be attending a Michigan History Day competition (a subset of National History Day, a school competition where students in 4th-12th grade compete with history research projects for a national prize) to take photos and video, or traveling to a part of Michigan (or another state) to record HSM’s conferences and bus tours.

It’s a varied position with a lot of independent multitasking, and I am often kept on my toes. But, if I’m honest, I like the constant speed.

Why did you choose to work for the Historical Society of Michigan?

I have a long-standing relationship with them. I worked for HSM in the summer of 2014 as an intern, where at that time, I was an Editorial Assistant, gaining experience in the world of magazine publishing.

Then, in 2017, I reached out to Nancy and asked if she needed a part-time and/or contract videographer. I was looking for summer employment immediately post-graduation, and I gave it a shot. She was interested, and I began working for HSM part-time, focused mostly on video, but with some of my editorial responsibilities from my previous internship. As I am also a writer, the added editorial tasks were a bonus.

After six months of working part-time, I was offered my current full-time position. They wanted more video and wanted to increase my responsibilities in social media and on the editorial staff.

In terms of why I accepted the part-time (and later, full-time) position, that is a bit more complicated. I wanted to continue to have the freedom to do freelance film work and stay within my existing network of fellow filmmakers and artists. However, I also needed a (fulfilling) day job, especially as I was trying to navigate the stressful world of an early 20-something graduate, while trying to decide what I wanted to focus on first in life and also deciding where I wanted to establish myself.

HSM provided me with the creative outlet for writing, social media, and video — along with the fast-paced environment that I was looking for — and it left me with just enough leeway to continue to work as a filmmaker on creative projects on the side.

I am still able to gaff, DP, and write film projects, but I also am in a position where I am growing my professional network of contacts in publishing, social media, and corporate videography. It felt like a wonderful cross-section from which I could launch my career.

I’m not someone who enjoys only one passion, so I needed a job that allowed for exponential growth in multiple areas. HSM was able to provide that.

I managed to find a job that kept me bumping around with all of my passions!

How have you been able to incorporate your film studies degree into your work?

Film Studies is a degree focused not only on the films themselves, but on the research, analysis, and dialogue surrounding the core of all things: the human experience. I found Film Studies to be an expansive degree, as the discussion-based classes and extensive writing bolstered my abilities to communicate, write, argue, and develop my theories on chosen subject matter and turn that drive and critical lens on multiple subjects.

While obviously my focus in life at this point is film, the writing basis of the Film Studies degree carries the core concepts of communication and connection with yourself, the world, and the human elements that make all connections meaningful.

As someone who sees writing as one of the most authentic forms of human connection, followed by film, Film Studies was a valued degree and something that I wanted to carry with me into my immediate career.

HSM, a nonprofit organization devoted to statewide outreach at all levels via various programming, publications, and media, had some of those same core concepts. How do we as a society connect? How can Michigan’s history help Michigan’s present? How do we, as a part of Michigan’s cultural footprint, exist as regions and mindsets? How can we connect those mindsets and ideas with Michigan’s history and create a meaningful relationship? Those are some of the questions HSM is asking, and they were ideas that I was interested in grappling with via publishing, social media, and video.

While the history element of the position was not something I was immediately drawn to (I am not a history buff), the connection-based structure of HSM’s mission and community was appealing and allowed me to pursue film and critical writing in a new way.

Did you have any internships and/or study away or abroad programs that influenced your career and/or life?

Besides the internship with HSM, I also had two other internships at MSU.

From Fall 2016 to Summer 2017, I worked as the Video Producer for MSU’s College of Education. That position worked directly with the college’s communications department to produce and edit corporate videos for the college that were then used as recruitment videos/engagement videos.

In addition to those internships, I also worked as a Teaching Assistant for CAS 112 from Spring 2016 to May 2017.

All of the above influenced my eventual path to my current position, as they involved video, social media, and writing, all to a different extent. I’ve been bumping about in the same general sphere for the past several years — I managed to find a job that kept me bumping around with all of my passions!