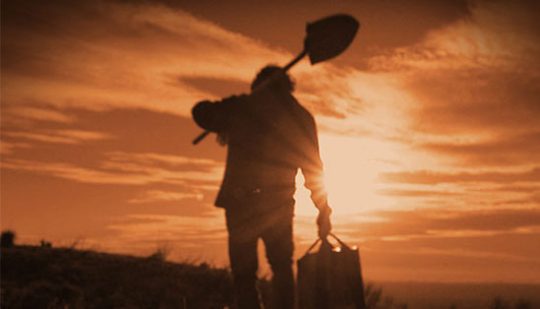 MSU Professors of Practice John J. Valadez and Carleen Ling-an Hsu will receive two top honors from the Broadcast Education Association (BEA) at its annual conference in Las Vegas. There they will be presented with the Faculty Documentary “Best of” award and the first-ever Diversity and Inclusion Creative Award for their WKAR/PBS film The Head of Joaquin Murrieta.

More than 1,550 entries, representing more than 175 colleges and universities across the country, were submitted for this year’s competition. Valadez and Hsu, who each have dual appointments in the Department of Media and Information and the Film Studies Program in the Department of English, had the top overall entry in the Faculty Documentary Competition.

“As filmmakers, we spend years thinking about our subject, then painstakingly try to articulate the idea and craft it into a film for a wide audience. In the end, we send it off into the world over the airwaves or through cables in the ground. We often don’t know how it impacts people because we are not in their living rooms watching with them,” Hsu said. “Winning these awards from BEA is not only a huge honor because it comes from our fellow educators, it is a reminder and affirmation that what we do both as filmmakers and educators really does matter.”

Written and directed by Valadez and produced and edited by Hsu, The Head of Joaquin Murrieta is a short documentary that follows Valadez as he travels across the country — from New York to California — with the 165-year-old severed head of the legendary Mexican outlaw Joaquin Murrieta.

According to historical accounts, Murrieta came to California around 1850, looking for wealth as the Gold Rush was just beginning, but after his wife was raped and murdered by Anglo-Americans who jumped his claim, Murrieta embarked on a trail of revenge and murder. He, along with other Mexicans who were abused by Anglo newcomers, were suspected of killing as many as 54 people across northern California.

Painting of Joaquin Murrieta on a horse

In response, John Biger, then Governor of California, hired a group of bounty hunters, called the California Rangers, to hunt down Murrieta. A month later, the rangers returned to Sacramento with a severed human head and collected the $1,000 reward offered by the California legislature. The rangers then traveled throughout the state charging people $1 to see their trophy.

The head became a rallying cry for Anglos to initiate a brutal period of ethnic cleansing and drive Mexicans out of the newly acquired west. Murrieta later became the inspiration for the fictional character Don Diego de la Vega, also known as Zorro. To Mexican Americans, he came to symbolize resistance against Anglo-American racism and manifest destiny.

The Making of the Film

For more than a decade, Valadez searched for Murrieta’s purported severed head. His inquiry eventually led him to a private collector in California who refused to let him see the head, which he was told was preserved in a jar. At that point, Valadez said he figured the whole thing was probably a hoax, so he flew back to New York, where he was living at the time, and assumed the film would never be made. But then, more than a decade later, he received a package in the mail postmarked from California, containing what appeared to be a preserved human head.

“It’s a story that resonates today as we find ourselves in an era of intense anti-Latino sentiment with the widespread reassertion of white supremacy.”

Valadez then set out to bury the artifact in Arroyo de Cantua, where Murrieta was purportedly killed during the summer of 1853. In the film, Valadez artfully – with humor and wit – uncovers the violent and hidden history of Mexicans and Anglos in the West giving insight into the origins of the current tensions around immigration and American identity.

During his travels, Valadez also learns about the murder of his own great-grandfather and the loss of his family land, revealing an uncanny personal parallel to the Murrieta tale.

“The film gives a very different, more nuanced perspective on American history than the old, tired, heroic myth of white-Anglo westward expansion that most of us grew up with,” Hsu said. “It’s a story that resonates today as we find ourselves in an era of intense anti-Latino sentiment with the widespread reassertion of white supremacy.”

The Head of Joaquin Murrieta was released in 2016 and submitted in late 2017 to the BEA’s Festival of Media Arts Competition, which is a competitive forum open to BEA faculty and student members. The 16th annual festival will be held in Las Vegas on April 7-10, 2018.

Valadez standing under the hanging tree in Goliad, Texas.

On Monday, April 9, Valadez and Hsu will be recognized and presented with a $1,000 cash award during the festival awards ceremony, held at the Westgate hotel on the Vegas strip. The ceremony also will include a special screening of The Head of Joaquin Murrieta.

“The irony is that the monetary award is the same amount the California Rangers received for delivering the severed head to Governor Bigler,” Hsu said. “The thing is, no one was ever sure if they even got Murrieta. Most of the newspapers at the time believed the rangers just killed some unfortunate Mexican kid in order to snag the reward money.”

The Diversity and Inclusion Award is significant because it values original, innovative research that brings a fresh, more accurate understanding of the American experience to the national dialogue on race and power.

According to new scholarship in the film, there were 871 documented lynchings of Mexican Americans in 13 western states. In proportion to their numbers, Latinos were lynched in the West as often as African Americans were lynched in the South, Valadez said, which re-frames the Latino experience in a way that most American’s never knew or understood.

This is a tremendous honor, not only for the quality of the work, but because we live in a time of extraordinary fear, stoked by broadly embraced ethnic hatreds.

“This is a tremendous honor, not only for the quality of the work, but because we live in a time of extraordinary fear, stoked by broadly embraced ethnic hatreds,” Valadez said. “These awards are in direct opposition to the ‘rapists and murderers’ coming across the border and ‘he can’t do his job because he is Mexican’ statements we keep hearing from folks who walk the corridors of power.”

Valadez teaches documentary filmmaking, is a producer at WKAR, and is the Director of the Doc Lab, a studio for creative nonfiction filmmaking at Michigan State University. The Doc Lab is a joint venture of the Film Studies Program and the Department of Media and Information.

Hsu has traveled the world producing nonfiction films for HBO, PBS, the Learning Channel, BBC, and Channel 4 UK. Her documentaries often explore themes of health, science, and the environment. She has won two George Foster Peabody Awards, a feat that no other professor in the history of the state of Michigan has ever achieved.