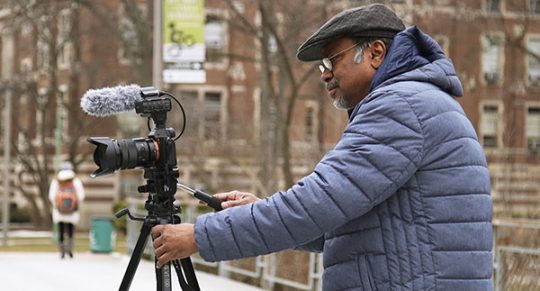 BEHIND THE WILL is a video series that gives viewers an inside look into what drives our faculty’s research, teaching, and creativity at Michigan State University’s College of Arts & Letters.

Dr. Swarnavel Eswaran Pillai is an Associate Professor in the Departments of English, and Media and Information at Michigan State University. He graduated from the Film and Television Institute of India (FTII), a premier film school in Asia, and the prestigious University of Iowa, where he received his doctoral degree in Film Studies. His research areas include the history, theory, and production of documentaries and short films, and the specificity of Tamil cinema and its complex relationship with Hollywood as well as popular Hindi films.

Having taught more than a dozen different classes at MSU—from introduction to film and film technologies to film history and even a capstone seminar on the digital documentary — Eswaran Pillai’s ability to combine the scholarly with the creative has propelled his success in the classroom. For example, in the Film in Britain Program, Pillai designed several production-oriented classes on documentary technologies and screenwriting, and embedded them in the specific context of the British cinematic tradition, where documentary has played an especially vital cinematic role. In this way, he combined historical analysis of the British documentary with production of documentaries situated in Britain, allowing students to apply their newly acquired historical understanding to their own creations.

His recent publications include Madras Studios: Narrative, Genre, and Ideology in Tamil Cinema (Sage Publications, 2015) and Cinema: Sattagamum Saalaramum/Cinema: Frame and a Window (Nizhal Publications, 2012). This latter book is an anthology of scholarly essays in Tamil on documentaries and experimental films. He is an accomplished documentary filmmaker, and his recent films include Unfinished Journey: A City in Transition (2012), Migrations of Islam (2014), and Hmong Memory at the Crossroads (2016).