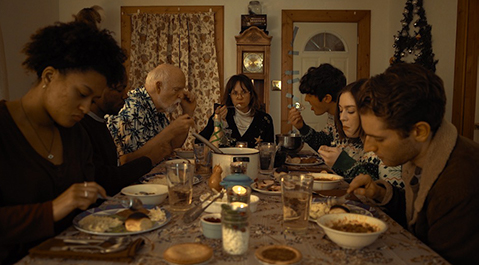 Resilient – that is the word to describe the students of the 2019-2020 Fiction Filmmaking Capstone class, who faced countless obstacles this past academic year, but each time they were knocked down, they stood up and figured out a way to move forward.

Students in this capstone course spend the fall and spring semesters producing an original film in order to graduate with a minor in Fiction Filmmaking. However, this year after the first semester and having completed about a quarter of the filming on their film, titled Rum and Coke, the students found themselves starting over with half the time left to produce an original film.

“We filmed most of Rum and Coke before winter break, but then everything kind of fell apart,” said Cinematographer Tanner Evans. “Our lead actress became unavailable and one of our lead actors broke his collarbone, but our writers got back to work, trying to write an entirely different story that would be feasible in terms of production. This is where Taco Soup was born.”

Taco Soup is a dark comedy about a family holiday dinner gone wrong and has an entirely different plot and cast than Rum and Coke.

For this short film, the 11 students in FLM 435A and FLM 435B created their own work, controlling every aspect from directing and producing to makeup artistry and composing. The capstone class was led by Department of English Professor Jeff Wray and Department of Media and Information Academic Specialist Rola Nashef.

Two months into the Taco Soup project and with two months left in the school year, Michigan State University suspended all face-to-face instruction and moved all coursework online after the state of Michigan had its first confirmed cases of COVID-19.

“The impact of the COVID-19 pandemic on finishing Taco Soup cannot be overstated,” said Aaron Mariasy, a junior Political Sciences major and the film’s Assistant Director and Writer. “It was a shocking, sad, and gut-wrenching way to end a year already filled with unprecedented challenges.”

Due to COVID-19, the last shoot day was canceled, which was needed to shoot the ending of the film. Determined to finish their project, the students began brainstorming new ways to do that.

“We worked with what was already shot, shifted footage to different parts of the movie, and even devised and filmed a new ending without ever having to be in the same room as one another,” Mariasy said.

On April 30, all their efforts paid off when Taco Soup launched onYouTube. It has since accumulated more than 900 views.

“We started the year with only 11 students to produce the film, we had our main actress drop out halfway through production, and then a global pandemic shut the whole world down,” said Writer and Casting Director Aaron Applebey. “No matter what, every time something went wrong, we put our heads together to find a solution and ended the school year with a finished movie.”

Kristina Familara, who graduated in May and majored in Media and Information with a minor in Fiction Filmmaking, worked as a writer and was the first female director in the course’s history.

“This project has taught us so many valuable lessons in life and in filmmaking,” she said. “We learned how to be a real team, how to produce a film from start to finish, and how to overcome so many obstacles and still rise up.”

The cast and crew of Taco Soup, include:

“Even in the last few weeks on the dreaded Zoom, once they figured out how to end the film and it worked, they enjoyed the discovery of that moment,” Wray said. “If I remember correctly, there was even applause in our Zoom meeting. Love this group. Every single one of them.”

The student filmmakers now plan on submitting their work to events such as the Traverse City Film Festival.