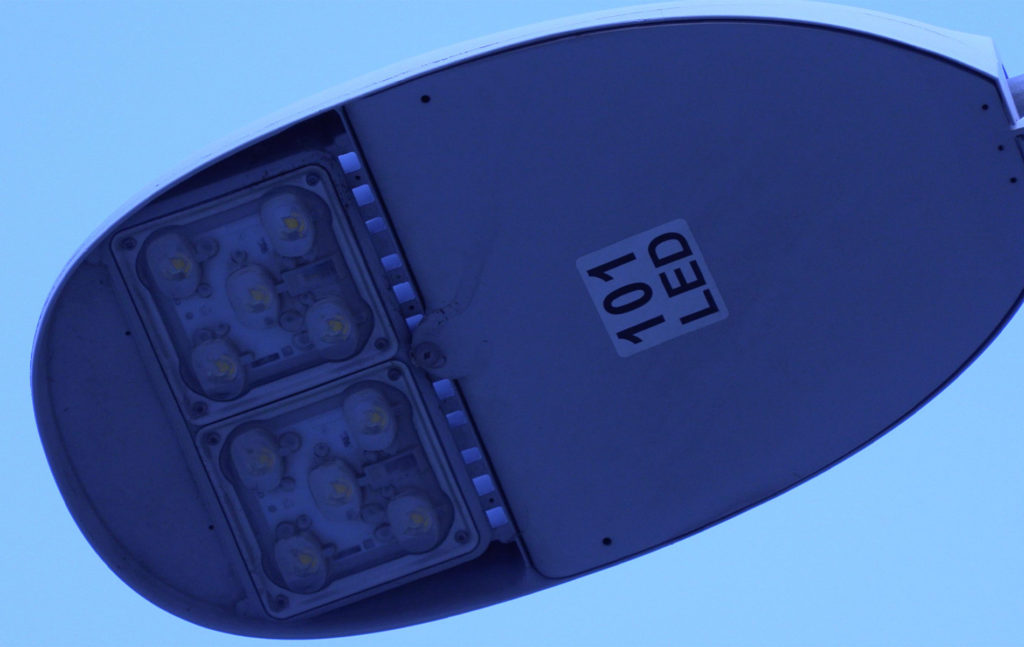 Anonymous. Taken near the location in which an unnamed transperson’s body was found

Professor Lyn Goeringer’s installation, Witnesses, is featured in the Science Gallery Detroit’s current exhibit, Future Present: Design in a Time of Urgency, which runs through December 11, 2020, and is open to the public. A composer and intermedia artist who works with video, sound, and light, Goeringer is an Assistant Professor of Composition in the College of Music and of Film Studies in the Department of English.

“It was as if each neighborhood had its own signature, one that seemed to correlate to the socio-economic conditions therein,” Goeringer said. “The correlation in Detroit was similar. Despite the reduction in above-ground wires due to lighting remodels over the last decade, there was an undoubtedly stronger EMF signature in lower-income Detroit neighborhoods.”

Goeringer has been researching surveillance infrastructures, and streetlights specifically, for more than a decade.

“Working with streetlights surfaces, how everyone has a story associated with a streetlight: being told to be home by the time the streetlights come on, a teenage kiss under a streetlight, the single streetlight at the one intersection in a small town. These stories are automatic and intimate, and they each hold such significance in our memories,” Goeringer said. “In some small way, the streetlight become a magical object, this thing that conveys information, holds vigil to our memories, and in many ways, becomes an object of protection. By staying on well-lit streets, we believe ourselves to be safer. The light is a protector, a timekeeper, a guardian. But then, the question for me is what is the streetlight actually a guardian of? What began as a questioning of an everyday object, the streetlight, has become a much bigger question, a much bigger problem to wrestle with.”

Witnesses focuses on Detroit’s complex relationship with street lighting. The nine video installation features streetlights turning throughout Detroit in locations where trans people of color were killed over the past decade. Seven of the nine people are: Ashton O’Hara, Amber Monroe, Paris Cameron, Keanna Matel, Sharita Maxwell, Shelley Hilliard, and Coko Williams. The other two are unknown.

“In this piece, the streetlights provide a symbolic weight. Because these people were not killed necessarily under the lights themselves, I am asking us to dig a little deeper. What does this symbol, this icon, of personal safety in public spaces actually provide us? Such an astute representation of who matters in society, what matters in society,” Goeringer said. “It isn’t just about streetlighting, but about surveillance and visibility more broadly. Over the last decade, we’ve watched countless videos of Black men and women being murdered by police — George Floyd, Eric Garner, Walter Scott — and many of us saw the videos of Rodney King in 1991. While this isn’t a new phenomenon, to watch a Black man die at the hands of police or state-sanctioned violence, this is just a snippet of a much larger problem of those we never see and don’t often hear about.”

Cities were not built for everyone, but we can transform them so that they can be inclusive, supportive, and safe for everyone… Black trans lives matter.

Goeringer hopes that through this exhibit, audiences will become increasingly aware that trans people of color are killed at an alarming rate, and that we can all help by truly seeing who is around us.

“That we make choices in who we see and care for, and that even though light is provided to help us see and be seen, we often make choices on who to ignore,” Goeringer said. “Cities were not built for everyone, but we can transform them so that they can be inclusive, supportive, and safe for everyone… Black trans lives matter.”

The Science Gallery Detroit’s Future Present exhibit includes more than one dozen free programs by worldwide artists, scientists, and researchers. Guests will experience virtual sci-art programs under a pandemic sensitive environment featuring capacity regulations, low-touch tours, and real-time robot mediation. This year’s third annual exhibit explores humanity’s nuanced relationship to various forms of design, and the impact it has on the future. Specifically, it considers three themes: design and systemic change, technological impact on society, and the creation of participatory design processes for a sustainable future.

(This article was first published on CAL News)

Arts Launch: Celebration of the Arts at MSU Set For September 12-18