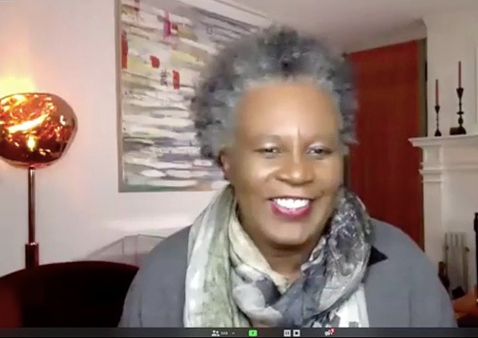 The College of Arts & Letters was pleased to host MacArthur Genius, Guggenheim Fellow, and acclaimed author Claudia Rankine as a part of the College’s Signature Lecture Series. This online event took place November 12 with about 360 people tuning in to the online interactive talk on racism and social justice.

Rankine is the Frederick Iseman Professor of Poetry at Yale University and the author of six collections of poetry, three plays, and various essays. She wrote the 2014 hybrid prose-poetry book, Citizen: An American Lyric, which has been critically accredited for bringing national attention to police violence against Black Americans, racial prejudice, historical trauma, implicit bias, and white supremacy.

The Rankine Signature Lecture event was held in collaboration with the John Lucas and Claudia Rankine: Situations exhibition at the Eli and Edythe Broad Art Museum at Michigan State University where, for the first time in a solo exhibition, the entire series of Situations videos collaboratively produced by Rankine and documentary filmmaker John Lucas appear. The videos combine still and moving images from archival, televised, and surveilled sources with voice-overs by Rankine to address both explicit acts of racism and insidious racist aggressions that are built into institutional structures and everyday life. The exhibition is on view through December 19, 2020.

The Rankine Signature Lecture event started by showing some snippets of the Situations videos and focused on critical discourses on race, racial difference, anti-blackness, white privilege, and systemic and personal practices that maintain life-threatening biases against Indigenous and Black people, and people of color.

Recent English alumna, Kelsey Walker, who was one of the winners of the “Who is a Citizen?” contest, introduced Rankine and discussed the impact of Rankine’s work on her life and education.

Rankine talked about her most recent book, Just Us: An American Conversation, published on September 8, 2020, which is a collection of essays, poems, and images, accompanied by notes on multidisciplinary research, that explores racism and white supremacy.

Rankine read parts of the book and explained why certain conversations were included and how she got those conversations on paper.

“These essays came from conversations I had with my friends and some with strangers,” she said. “The other parts of the book take images from actual events, especially involving the treatment of Black children. The very center of the book is an act for conversation, management of our own feelings, and the desire to converse.”

Rankine also discussed the cover work and other photos in her book, why she chose to use such images, and how she connected the images with the text. On the cover is a photo of the Lincoln Memorial reflection pool in Washington, D.C.

“I chose this image because it is like looking back at ourselves to see who we are and who we can become,” Rankine said. “Image should not illustrate the text but should be in conversation with the text so that it creates another pathway for thought, thinking, and consideration.”

Rankine ended the event by answering questions about the writing process of her book and who she hoped her books reached.

“The person I would most like to read my work is the person who wants to read it,” Rankine said. “The book is not focused to any specific gender or race but those who can and do take something away from my books.”

The lecture was streamed live on Facebook and YouTube. If you were unable to attend, you can watch the recording of the Claudia Rankine’s Signature Lecture.

In conjunction with the John Lucas and Claudia Rankine: Situations exhibit, the MSU Broad is hosting a special online screening of the John Lucas film, The Cooler Bandits, on Friday, November 20, at 7 p.m.

Lucas’ first feature-length documentary, which was awarded best documentary at the 2014 Harlem International Film Festival, The Cooler Bandits follows four friends in four stages of incarceration, struggling to confront their future after 20 years in prison. Lending voice to personal experiences of incarceration, the film encourages viewers to grapple with the inequities of our criminal justice system.

The screening, programmed in partnership with Capital City Film Festival and The Robin Theatre, will be followed by a discussion with people featured in the film. The event is free, but registration is required. To register, visit the MSU Broad website.

Originally founded as the Celebrity Lecture Series in 1998 by the College of Arts & Letters and the Dean’s Community Council, the series was later renamed the College of Arts & Letters Signature Lecture Series in 2007 and allows notable public figures to interact and engage with the faculty, students, and greater community of Michigan State University through conversations and discussions.

Support for this series comes from sponsors both within the university community and the community at large. Their generosity has been critical in attracting the best and most qualified individuals to conduct an informed and wide-ranging discussion of contemporary ideas and creative achievements in the arts and humanities.

The popularity of this series has attracted some of the most illustrious scholars, critics, novelists, poets, film producers, and creative artists of our time, including Soledad O’Brien, Ken Burns, Oliver Stone, Richard Ford, and Maya Angelou, just to name a few.

Student Filmmakers Featured in “Who is a Citizen?” Exhibition