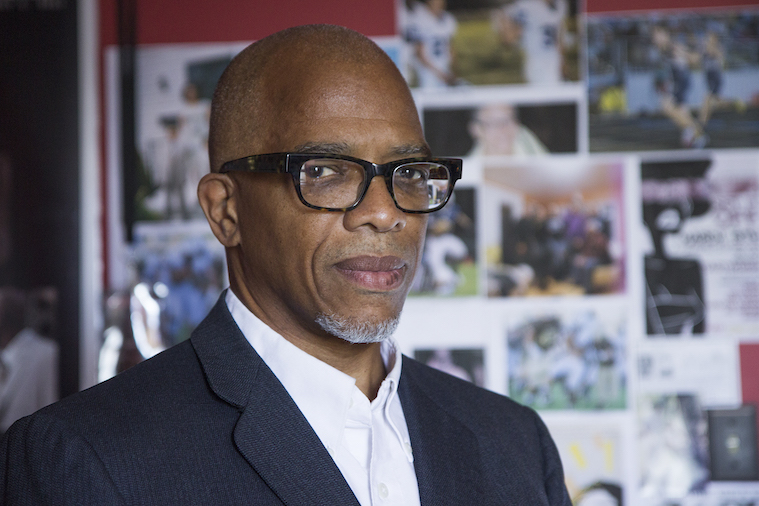 Jeffrey Wray, Department of English Professor and Associate Chair of Undergraduate Studies, was appointed the next Timnick Chair in the Humanities, effective August 16, 2021. Wray is the second MSU faculty member to hold the position, which was endowed in 2015 by MSU alumnus and retired businessman Henry O. Timnick in honor of his mother, Ottilie Schroeter Timnick, to reflect her belief in the value and promise of a liberal arts education.

“The Timnick Chair was created to cultivate in our students the humanist sense of a life well-lived, which Ottilie Schroeter Timnick herself embodied,” said Christopher P. Long, Dean of the College of Arts & Letters. “Professor Wray is an extraordinary teacher and scholar whose concern for the concrete lives of our students animates everything he does. He is a person of deep integrity with a vision for the Timnick Chair as a catalyst of collaboration and transformation that will enrich the life of the College and the communities with which we are engaged.”

Filmmaker, screenwriter, and educator, Wray has served as a core faculty member in MSU’s Film Studies program since 2002, previously serving as its director. He developed and teaches courses in film directing, screenwriting, and narrative film fiction, as well as in African American cinema and cinema of the African Diaspora. He also developed curriculum for the Fiction Filmmaking minor.

Professor Wray is an extraordinary teacher and scholar whose concern for the concrete lives of our students animates everything he does.

Christopher P. Long, Dean of the College of Arts & Letters

“I see this as an opportunity to transform the role and shape what it can be,” Wray said of the five-year Timnick Chair appointment and expressed a desire to break down silos across different disciplines within the humanities. “Undergraduate teaching is so important, and I want to place an emphasis on connecting the dots between different aspects of the humanities. I’m also deeply concerned with developing activities and speakers and ideas around issues concerning people of color and bringing those to the forefront. That is not only necessary but vital to the whole MSU community.”

During his nearly two decades at the university, Wray has received numerous awards recognizing his outstanding teaching including MSU’s William J. Beal Outstanding Faculty Award (2019), Excellence in Diversity Award (2017), and Paul Varg Excellence in Teaching Award (2016). The Timnick Chair in the Humanities also is a testament to his teaching excellence.

“I’m delighted that my dear colleague and friend Jeff Wray has been named the Timnick Chair. One of our college’s most gifted and inspiring teachers, Jeff possesses a truly humane generosity as a teacher, filmmaker, and department leader,” said Justus Nieland, Chair of the Department of English. “Jeff combines a career-long commitment to an engaged vision of the arts and humanities with the activist conviction that the humanities can and must change both our institutions and our world for the better. I look forward to seeing the transformational work Jeff will do in this new role.”

Wray is an accomplished filmmaker whose features and short films have been screened in the United States and abroad, including Chicago, New York, Los Angeles, Dakar, Zurich, Berlin, and Athens.

Jeff combines a career-long commitment to an engaged vision of the arts and humanities with the activist conviction that the humanities can and must change both our institutions and our world for the better.

Justus Nieland, Chair of the Department of English

Recent films include the short drama, Songs for My Right Side (2020), which was an official selection of The Artists Forum Festival of the Moving Image in New York, where it was nominated for Best Film and Best Actor. The film also was screened as part of the Pan African Film Festival in Los Angeles. MSU students were able to view the film online earlier this year as part of the Black History Month Encompass Series.

Conscious of and evolving out of the experience of the pandemic, Wray created two shorts: Elijah Hamilton-Wray – Emerging, an experimental portrait of a young artist, and Mother of All Pandemics, featuring the poet Brian Gilmore.

Earlier films include the hip-hop concert film Blat! Pack Live (2016), The Evolution of Bert (2014), which premiered at the Chicago International Film Festival and was nominated for the Roger Ebert Award, and China (2003), a meditation on marriage adapted from a Charles Johnson short story, which aired nationally on public television. He currently is writing a feature film set in Idlewild, a small resort town in northern Michigan that was one of the few places in the United States where African Americans were permitted to vacation and purchase property in the early 20th century.

For his filmmaking, Wray has received grants and fellowships from the PBS/Independent Television Service (ITVS),John Anson Kittredge Foundation, Art Serve Michigan, and Ohio Arts Council, among others.

I see this as an opportunity to transform the role and shape what it can be. Undergraduate teaching is so important, and I want to place an emphasis on connecting the dots between different aspects of the humanities.

“I make films about Black lives and Black people,” Wray says of the work he has created, indie-style, with his partner Tama Hamilton-Wray and a cadre of key collaborators over the last 20 years. “I guess my motto is, ‘Make films where you are, whenever you can.’ And to me, it doesn’t matter whether they are short or long.”

He emphasizes, however, the important role students have played in his development not only as a teacher but as an artist.

“As a filmmaker, students continually inspire me,” he said. “I feel fortunate to be able to spend the year teaching and learning from them and the summers making film. It’s been a good partnership here at Michigan State.”